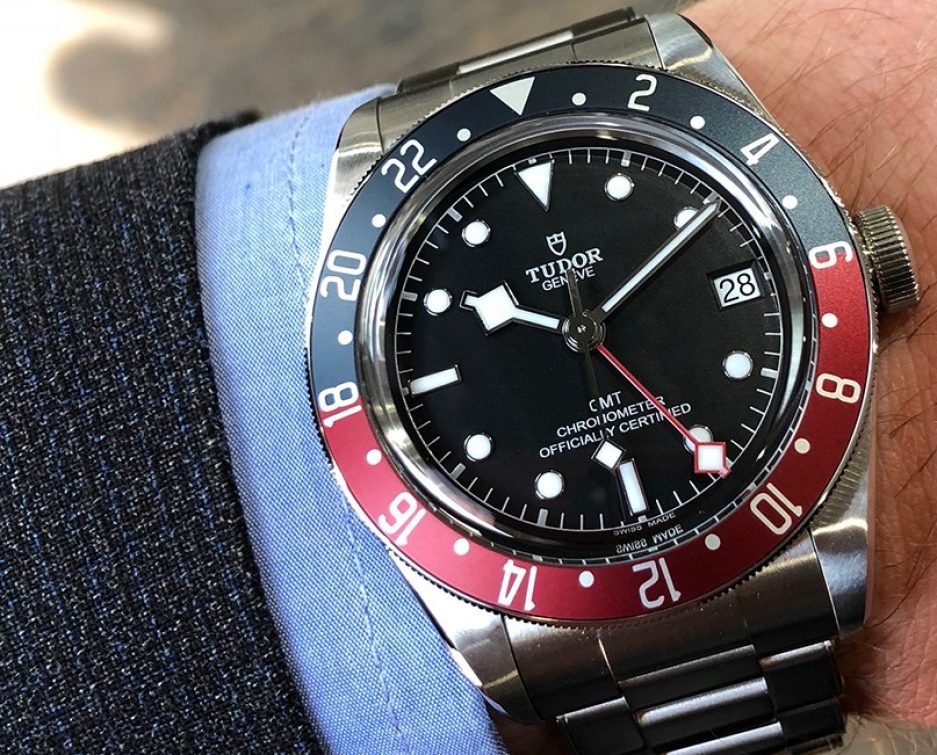 The horological machines from MB&F are ming boggling pieces, and true to what i have been saying all along; this is an art form. This “Final Edition” now features a flying tourbillon centrally positioned to be exhibited on the top of the case, as with the previous version, but it now also has a larger dome for a better view of it…. and why not!

I recently listed to a podcast on Hodinkee radio with Maximilian Büsser… I can honestly say it was truly insightful, to say the least. MB&F stands for Maximilian Büsser & Friends; and it turns out, Max wanted to register “B&F” when he first started out, but the registrar office advised against this as he would likely face legal challenges due to Bell & Ross having already registered “B&R” all over the world. Why knew!

Max’s story is delightful, and it was refreshing to hear about his journey. What stood out to me the most was his passion for creating unique and differentiated pieces – breaking the proverbial mould, as they say. He never set out to make money, and that came anyway. I cannot count how often I have heard this narrative when it comes to successful entrepreneurs… they start with doing what they love; money is a by-product. Food for thought, as always.

What do you think of this HM6?

When MB&F introduced the space-age, time-telling wrist sculpture HM6 in 2014, they stated clearly that only 100 examples of the unusual movement would be produced. Now, after a number of versions and variations, they’ve got eight movements left. These remaining movements will be going into the MB&F HM6 Final Edition watch, and there will be no more “Space Pirates” produced after that. Let’s see what MB&F has done differently for this occasion. 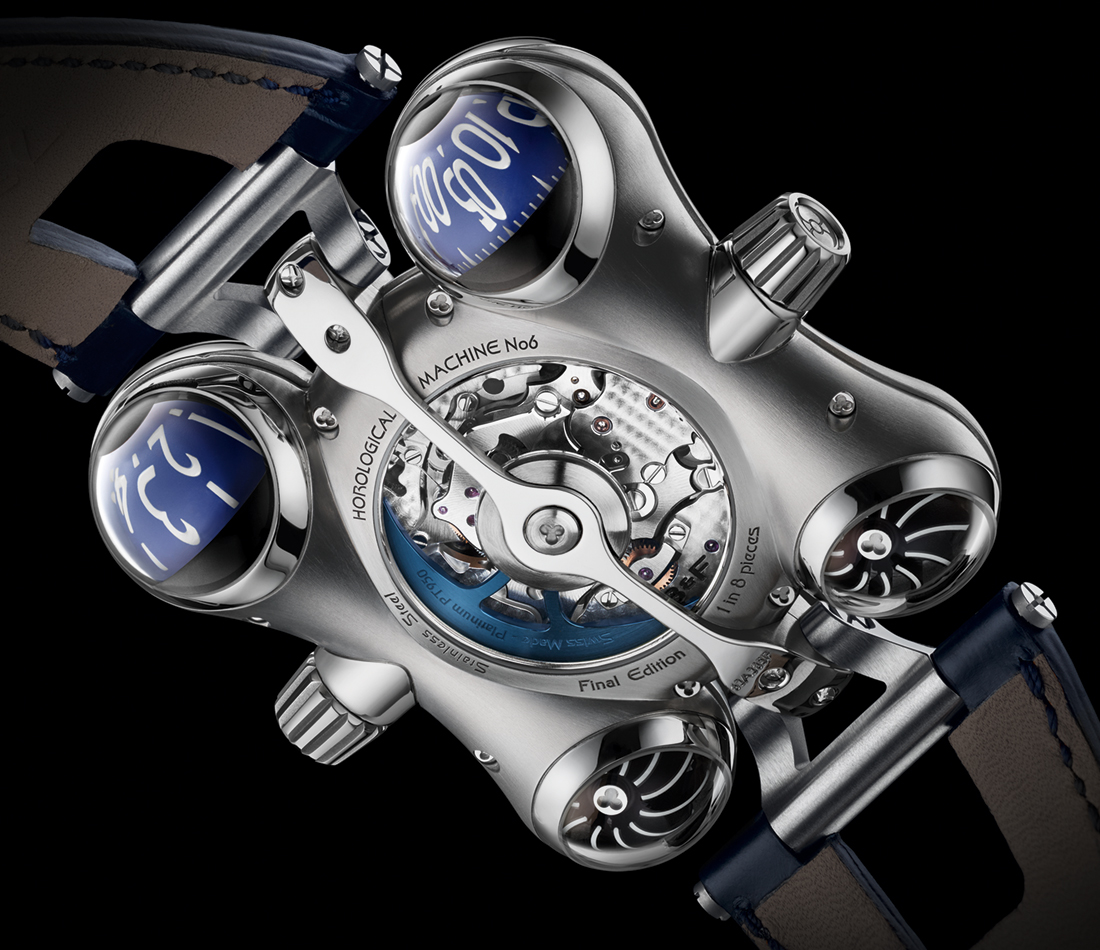 We have followed the HM6 closely. The MB&F HM6 was first introduced as the Space Pirate that we saw hands-on here in titanium. That initial version used 50 of the 100 movements, and an 18-piece red gold version followed. Then, there were 20 pieces with full sapphire crystal tops and bottoms called the HM6 Sapphire Vision which we saw hands-on here. Finally, the HM6 Alien Nation watchwas cased entirely in sapphire crystal and had a tiny sculpture of an alien “driving” it like a spacecraft, and only four of them were produced. That leaves eight movements for this last product hurrah. 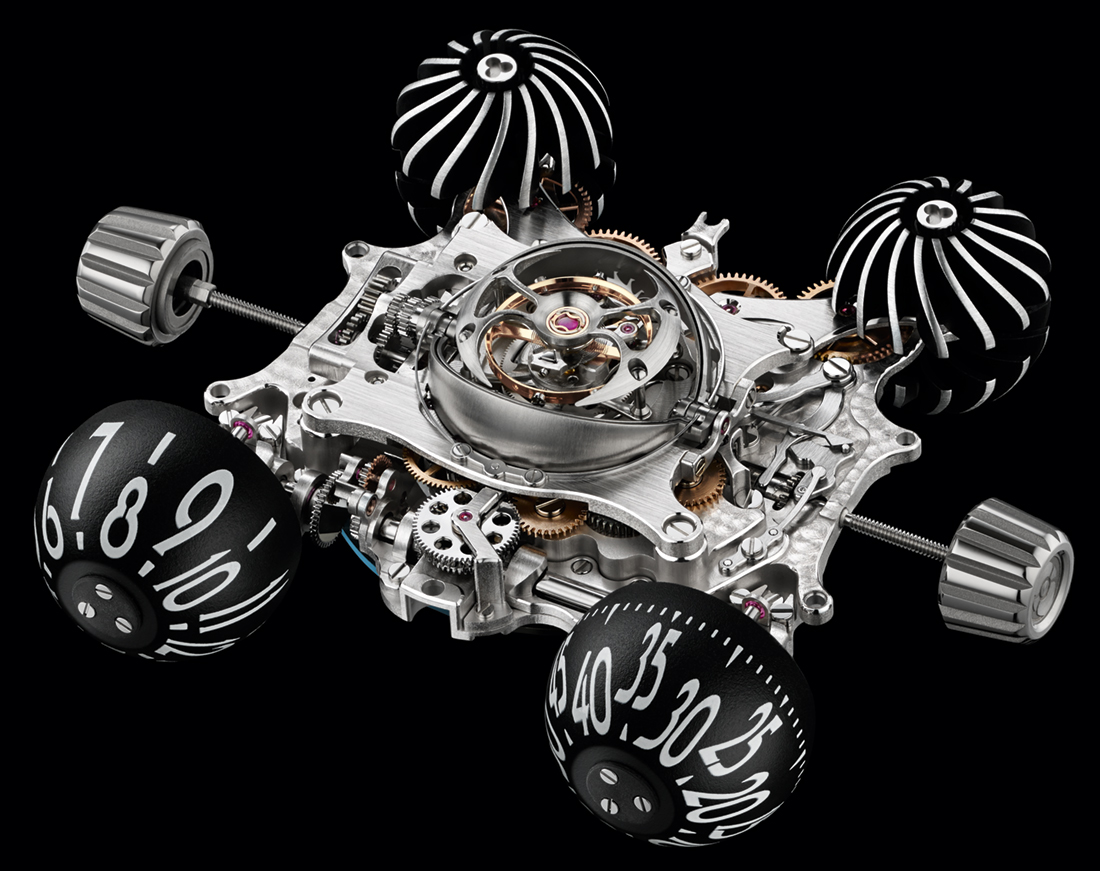 Separate from any of the various versions mentioned above, we got to see the movement in question uncased in our MB&F HM6 Space Pirate movement hands-on article here and discuss its technical features and details in depth. In short, it is radically shaped and highly complex with a flying tourbillon and unconventional time displays: spheres facing the wearer, one each for the hours and the minutes. The spherical “turbines” at the other end move around but are not functional. The movement also conveniently offers automatic winding and operates at 2.5Hz with a power reserve of 72 hours. The finishing of the 475 components is high-end and extensive as is to be expected at this price level. 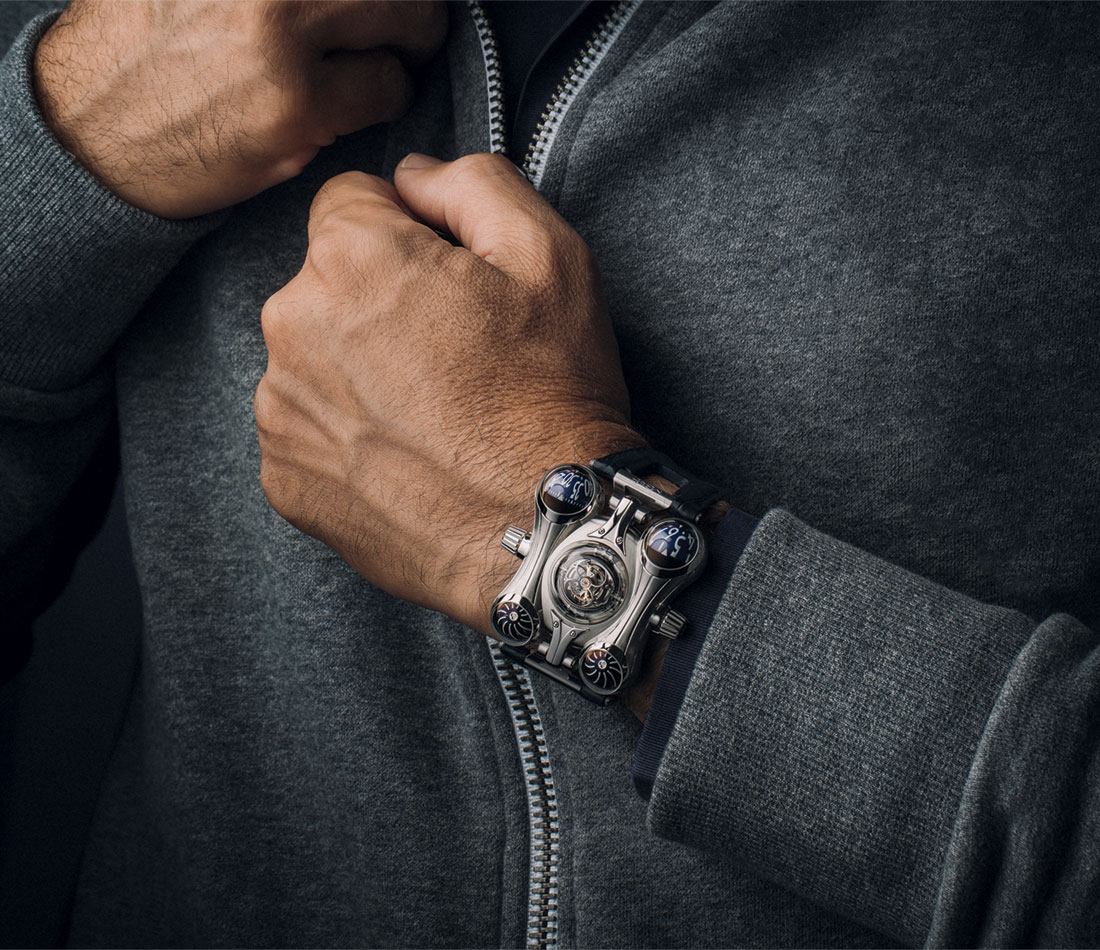 While the Sapphire Vision and Alien Nation models took a more angular approach presumably due to the difficulty of working with the sapphire crystal cases, the MB&F HM6 Final Edition returns to the more fluid case shape of the first versions that the brand describes as “biomorphic.” It measures the same as those at 49.5mm wide, 52.3mm long, and 20.4mm thick. The MB&F HM6 Final Edition, however, is in steel which MB&F amusingly refers to as a “very rare metal” in the context of such ultra high-end editions such as this which usually opt for something more exotic. It’s funny that some brands that prefer precious metals actually get away with precious metal prices (themselves often inflated) for steel watches just because of their “rarity” to collectors. In any case, the MB&F HM6 Final Edition is the least expensive (it is still very expensive) model yet with a price $15,000 less than the original Space Pirate in titanium. 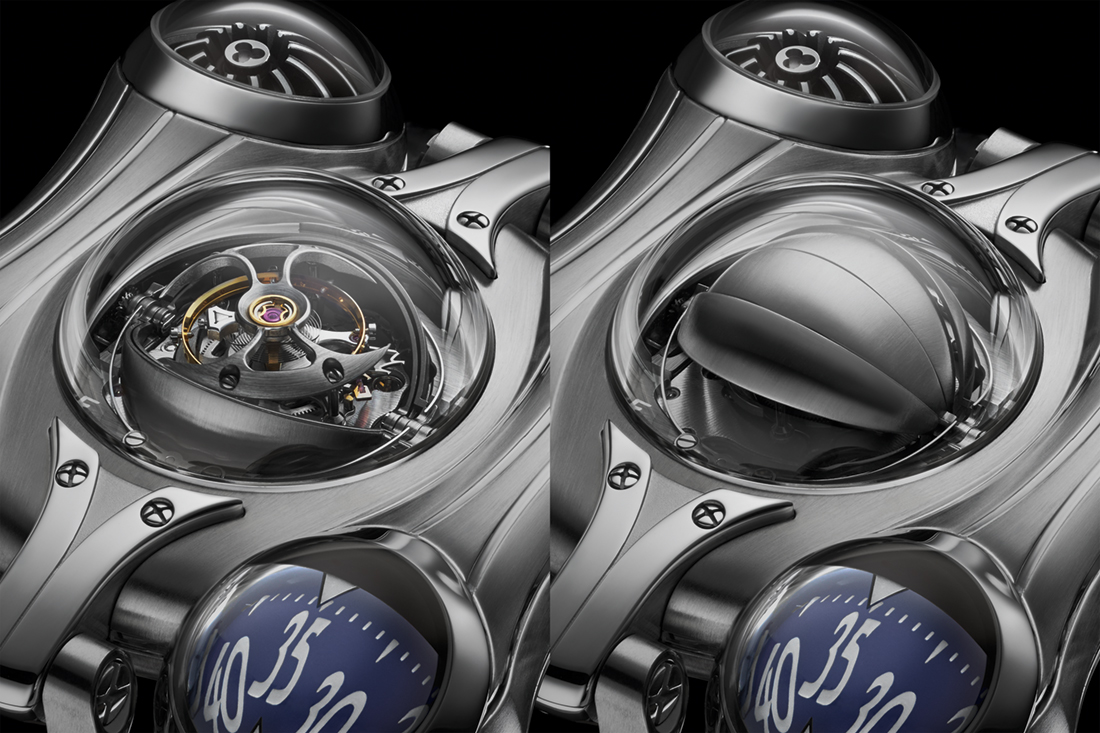 MB&F has done a couple other things to differentiate this model and make it more interesting than just a different case material. For the MB&F HM6 Final Edition, the flying tourbillon centrally positioned to be exhibited on the top of the case now has a larger dome for a better view of it. Recall that there is also a weird feature for the HM6 in which a sort of shutter “shield” can be manipulated to cover or reveal the tourbillon. The other differences are aesthetic, with polished grooves in the case, minor changes to the case construction, and a dark blue color for the hour and minute spheres and matching blue rotor. 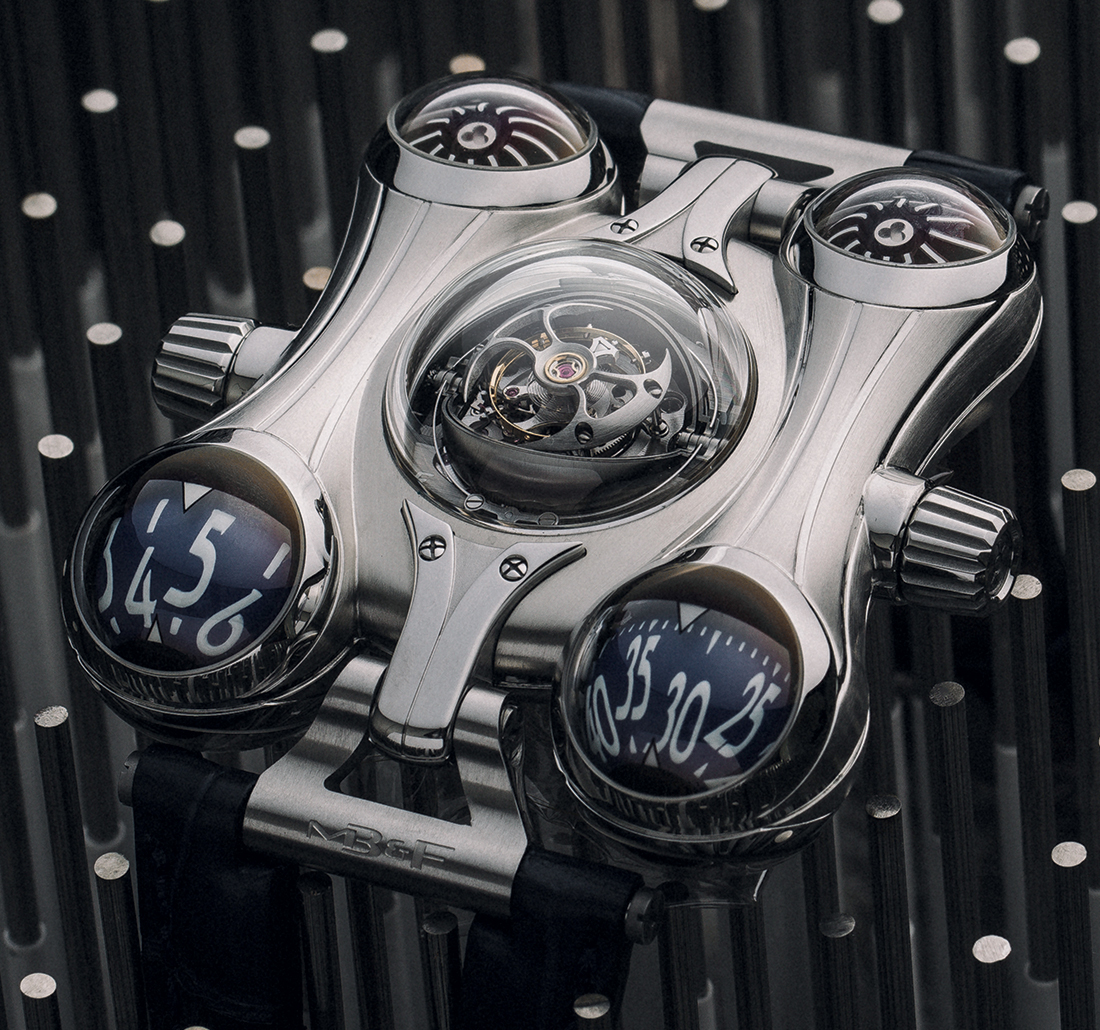 An energy industry professional currently working on renewable energy solutions for an oil major. Sharing thoughts on watches and productivity... View all posts by FK

There was an error retrieving images from Instagram. An attempt will be remade in a few minutes.

Error: Twitter did not respond. Please wait a few minutes and refresh this page.